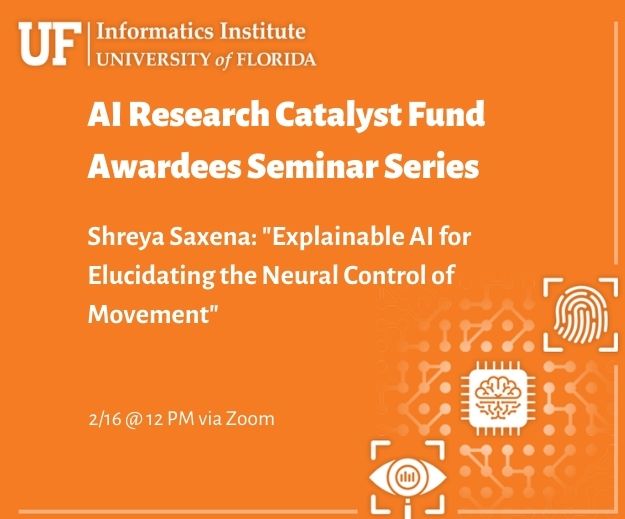 “Explainable AI for Elucidating the Neural Control of Movement”

How does the motor cortex achieve generalizable and purposeful movements from the complex, nonlinear musculoskeletal system? ​​Previous research in the field typically does not consider the biophysical underpinnings of the musculoskeletal system, and thus fails to elucidate the computational role of neural activity in driving the musculoskeletal system such that the body reaches a desired state. Here, I will present a deep reinforcement learning framework for training recurrent neural network controllers that act on anatomically accurate limb models such that they achieve desired movements. We apply this framework to kinematic and neural recordings made in macaques as they perform movements at different speeds, and analyze the consistency of the learnt controller with recorded data from motor cortex. This framework for the control of the musculoskeletal system mimics biologically observed neural strategies, and enables hypothesis generation for prediction and analysis of novel movements and neural strategies.

Next, I will focus on the neural control of behavior across different subjects. Effectively modeling and quantifying behavior is essential for our understanding of the brain. Modeling behavior across different subjects in a unified manner remains a significant challenge in the field of behavioral quantification, which necessitates partitioning the behavioral data into features that are common across subjects, and others that are distinct to each subject. We develop novel explainable AI methods for modeling continuously varying differences in behavior, which successfully represent distinct features of the behavioral videos across subjects in an unsupervised manner. These methods are also successful at uncovering the relationships between recorded neural data and the ensuing behavior. I will end with future work on Explainable AI methods for elucidating the neural control of movement.

Shreya Saxena is broadly interested in elucidating the neural control of complex, coordinated behavior. She is an Assistant Professor at the University of Florida’s Department of Electrical and Computer Engineering. Before this, Shreya was a Swiss National Science Foundation Postdoctoral Fellow at Columbia University’s Zuckerman Mind Brain Behavior Institute. She did her PhD in the Department of Electrical Engineering and Computer Science at the Massachusetts Institute of Technology studying the closed-loop control of fast movements from a control theory perspective. Shreya received a B.S. in Mechanical Engineering from the Swiss Federal Institute of Technology (EPFL), and an M.S. in Biomedical Engineering from Johns Hopkins University. Her research focuses on data-driven modeling of high-dimensional neural activity and the ensuing movements, and how this can be applied towards closed-loop neural control and prosthetic rehabilitation. Shreya was honored to have been selected as a Rising Star in both Electrical Engineering (2019) and Biomedical Engineering (2018).