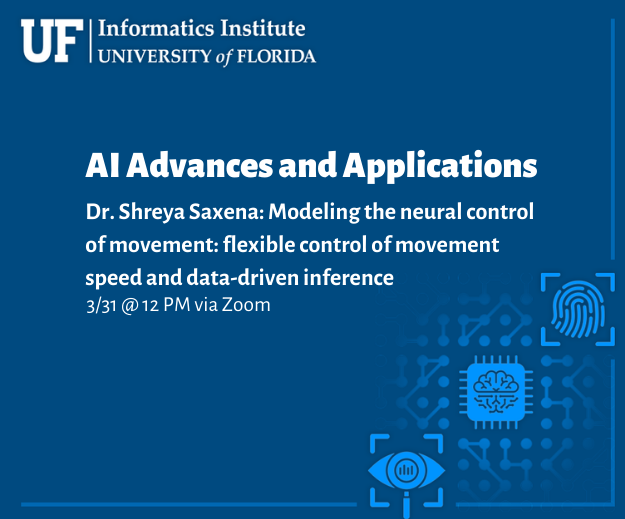 Assistant Professor in the Department of Electrical and Computer Engineering

How does the primate brain flexibly generate movements at different speeds?  We analyze muscle and motor cortex data from macaque monkeys trained to perform a cycling task at varying speeds. By leveraging insights from recurrent neural network models, we generate specific predictions for the dynamical structure of neural activity, which we then confirm in the data.  Both the model and neural data support the surprising view that the dominant features of motor cortex activity are not involved with the minutiae of creating complex muscle movements. Rather, these can be explained by considering how network activity should be structured to robustly generate the ensuing muscle commands.

In the second part of my talk, I will focus on methods for the data-driven inference of the relationships between high-dimensional cortex-wide neural activity and the ensuing behavior. Widefield calcium imaging enables recording of large-scale neural activity across the mouse dorsal cortex. Here, it is critical to demix the recordings into meaningful spatial and temporal components that can be mapped onto well-defined brain regions. To this end, we developed Localized semi-Nonnegative Matrix Factorization (LocaNMF) to extract the activity of different brain regions in individual mice in a data-driven manner. The decomposition obtained by LocaNMF results in interpretable components which are robust across subjects and experimental conditions. We also uncover the relationship of these neural signals to the resulting high-dimensional behavior. I will end by providing insights into how we can leverage theoretical analyses as well as data-driven models of large-scale cortical activity to restore impaired movements due to compromised neural transmission.

Dr. Shreya Saxena is broadly interested in the neural control of complex, coordinated behavior. She is an Assistant Professor at the University of Florida’s Department of Electrical and Computer Engineering. Before this, Shreya was a Swiss National Science Foundation Postdoctoral Fellow at Columbia University’s Zuckerman Mind Brain Behavior Institute. She did her PhD in the Department of Electrical Engineering and Computer Science at the Massachusetts Institute of Technology studying the closed-loop control of fast movements from a control theory perspective. Shreya received a B.S. in Mechanical Engineering from the Swiss Federal Institute of Technology (EPFL), and an M.S. in Biomedical Engineering from Johns Hopkins University. Her research focuses on data-driven modeling of high-dimensional neural activity and the ensuing movements, and how this can be applied towards closed-loop neural control and prosthetic rehabilitation. Shreya was honored to have been selected as a Rising Star in both Electrical Engineering (2019) and Biomedical Engineering (2018).