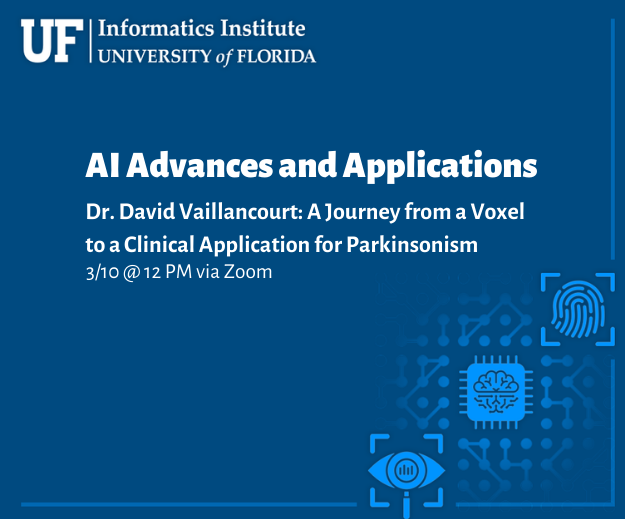 “A Journey from a Voxel to a Clinical Application for Parkinsonism”

Chair and Professor in the Department of Applied Physiology and Kinesiology

Across the globe, there has been a considerable growth in the number of people diagnosed with Parkinsonism.  Estimates indicate that from 1990 to 2015 the number of Parkinsonism diagnoses doubled, with more than 6 million people currently carrying the diagnosis, and by year 2040, 12 and 14.2 million people will be diagnosed with Parkinsonism.  Parkinson’s disease (PD), multiple system atrophy Parkinsonian variant (MSAp), and progressive supranuclear palsy (PSP) are neurodegenerative forms of Parkinsonism, which can be difficult to diagnose as they share similar motor and non-motor features, and they each have an increased chance of developing dementia. In the first five years of a PD diagnosis, estimates suggest that about 58% of PD are misdiagnosed, and of these misdiagnoses about half have either MSA or PSP. There is a critical need to develop valid, non-invasive biomarkers for Parkinsonian syndromes. I will take you on our journey from an initial laboratory finding using imaging in Parkinson’s disease, to now leveraging the power of machine learning and the internet to test models that predict differential diagnosis in Parkinsonism with potential far reaching impact.

Dr. David Vaillancourt, PhD, is currently a Professor and Chair in the Department of Applied Physiology and Kinesiology.  Vaillancourt’s research focuses on how the brain regulates movement with a specific focus on voluntary and involuntary motor disorders. His research program uses advanced neuroimaging techniques to study the functional and structural changes in the brain of people with motor and cognitive disorders that span Parkinson’s disease, tremor, dystonia, and Alzheimer’s disease.  Vaillancourt has conducted studies investigating interventions including rehabilitative, surgical, and pharmacological interventions, and published this work in journals that include Brain, Annals of Neurology, Journal of Neuroscience, Science Translational Medicine, Lancet Digital Health, JAMA Neurology, Neurology, Human Brain Mapping, Neuroimage, Cerebral Cortex, and Neurobiology of Aging.  He has been continuously funded by NIH since 1999, and now directs several R01/U01 grants from NIH.  Active work in his lab includes progression studies focused on changes in the brain for Parkinson’s disease and Parkinsonism, studies of tremor and brain connectivity, and pharmacological and neuroimaging studies for dystonia in mouse and human.  He has served as Chair of the NIH Study Section Motor Function Speech and Rehabilitation and reviews grants for the Michael J. Fox Foundation and National Parkinson Foundation.  He has been primary mentor on both F32 and K-series awards from NIH.  At UF, he created the course entitled “Movement Disorders” which is now the foundation course for a T32 training grant from the NIH for training doctoral students in movement disorders.